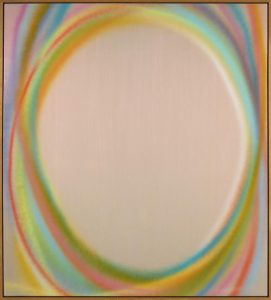 On February 1, 2022, Berry Campbell gallery will present the work of artist Dan Christensen with a focus on his spray painting technique. His work can be seen as a move beyond minimalism contrary to a suggestion that “painting is dead”. The gallery writes:

Christensen first received recognition for his innovative use of the spray gun in the late 1960s. His early sprays were heralded by the critics for epitomizing an exuberant type of painting that broke from the sober formalism of Minimalism and that reclaimed art traditions of the postwar years. In 1967, Christensen purchased his first spray gun from an autobody shop in a day before the airbrush became a popular artistic medium. After at first seeking control over a difficult technique in works with grid formats, he laid his canvases on the floor and loosened up to create swirling, looping arcs with muscular force on huge vividly hued fields. While re-invoking the mark-making of action painting, the soft-edged gestures were not self-consciously gut-wrenching, but instead evinced a love of color and autonomous freedom, drawing the viewer into a directly visceral lyrical engagement.

Christensen’s work is discussed with respect to his spray paint technique in the book Abstract Painting: Concepts and Techniques .