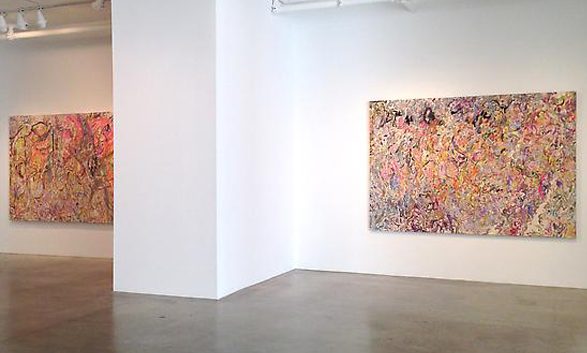 Included in “Abstract Painting: Concepts and Techniques”, along with several reproductions of his work, is an excerpt from an interview  by John Zinsser with Poons in 1990

First, it was the dot pictures. . .I was known. . .I was talking to one of the artists in the gallery. I said, “I don’t know what the hell to paint. I’m worried. I don’t know what to do.” And the person said to me, “You don’t have to worry about what to do, you’re Poons.” And I looked at him, and I said to myself, “You’re so wrong. That isn’t why I’m doing this.”

The 2014 show of new work is detailed here by Hyperallergic”

This isn’t to suggest that Poons has made a special effort to keep abreast of artistic fashion; rather, he’s simply failed to follow a conventional career arc with a centrally located zenith. His work has been manically open-ended for decades. From the agitation of the elliptical spots that inaugurated his precocious beginnings in the early 1960s, to the torrents of impasto with which he sprayed his way through the 1980s and 1990s, followed by more experiments in texture and paint application — not all successful, but never diffident — Poons’s career has been something of a protracted high-wire act, dedicated to the pursuit of painting on its own terms.