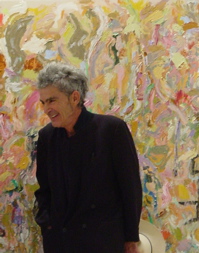 Larry Poons is included in “Abstract Painting: Concepts and Techniques”, along with several reproductions of his work and quotes from our interview.

Here in conversation with David Ebony:

we all had our feet off the ground to the extent that nobody knew what was really happening. Except for showing your work, selling a painting or two, we were not exactly grounded in anything specific. Looking back on it, I wouldn’t say it was exactly blissful, and not exciting in a familiar way. It was delightfully fucked up. Things were not organized in a business sense or in a commodity sense. It was nice.

And I stumbled upon this wonderful discussion about Poons by Frank Stella (I have to track down the citation – 1999):

Larry Poons deserves a better fate and being understood as a defender painting, perhaps even the defender of painting. Much has been written about the drama and originality of his paint-throwing technique. He has been seen as one of the most gifted manipulators of pigment in our time. His problem, the reserved and, at times, patronizing public perception of this work, arises not so much for faults in Larry’s efforts, but from defects in the public’s ability to come to grips with what real painting is all about. The truth is that the public is not particularly into, or even sympathetic to, pictorial drama and originality. Even more damaging, even truer, is the fact that the practicing part of the art-world public doesn’t care about pigment, the ultimate material reality in painting.